Top Posts
The Stepford Wife who revolted
The waitress
Knit One; Drop One – a lesson in...
Auntie Bridie’s Funeral in County Cork
Its just another day by the beach
Marlboro in the morning
Sisterly Love
Arcady comes to visit us in New York...
Roger and the Atlas Mountains
Full flight from Dar es Salaam
Home Letters of Hadji and Nonna Auntie Bridie’s Funeral in County Cork
Letters of Hadji and Nonna

How are you?  Are you well?  I hope you are in fine fettle because I have just returned from Auntie Bridie’s funeral.  It was a bit of a mission seeing as it was in Ireland, but I thought one of us has to make the effort to attend.  Yes, that’s a knock!  I don’t know why I ended up attending a funeral of one of your relations, but there you go.  Citing that you are currently living in Singapore and it was too far to attend wont hold water with me.

The journey itself was more gruelling than the funeral.  Pull up a chair and I’ll tell you all about it.  Because, for sure, I need to tell someone.   Do you remember if the Pope ever came on the television, Auntie Bridie would immediately get down on her knees and cross herself.  She also muttered something under her breath which I took to be a blessing, rather than a curse.  Although hurling herself up off her knees after this little demonstration of the catholic faith probably did necessitate a curse or two, albeit in a stage whisper and with another Hail Mary for forgiveness next.   As far as I know she carried on this way, along with her sister, both of whom remain unmarried to the day they died.  Such a shame she didn’t marry Shamus when she had the chance but I agree, who wants children with bright red hair?   In fact  one could cite that she was on her hands and knees again, ( although this time she was Cardinal Redding the door step, when she stumbled backwards and broke her hip.  The broken hip called for a stay in hospital which really was the end of her, especially when they told her that the Priest only came once a week to give Mass.  It wouldn’t on a Sunday and no Confessions could be heard.  Nil by Mouth took on a whole new meaning after that and she soon slipped away .

We had to order three Mini Buses to meet us all at the airport.  People I didn’t know of and people I certainly had never met became part of this rather surreal party.  there was little time for introductions or cocktail party chat.    However somewhere along the line we seem to have got the wrong time, ( well us and the rest of the mourners on the plane) and just as we were pulling into the village we saw the Hearse pulling out.  I tried to gesticulate from Row 4 in the Mini Bus to Milo the Driver but he had pulled up at traffic lights.  ” FORGET THE LIGHTS!” I shouted “and just follow that coffin” and all of a sudden Milo and his entourage of drivers was scaling through the gears and catching up the main funeral cortege.

How did we get it so wrong? 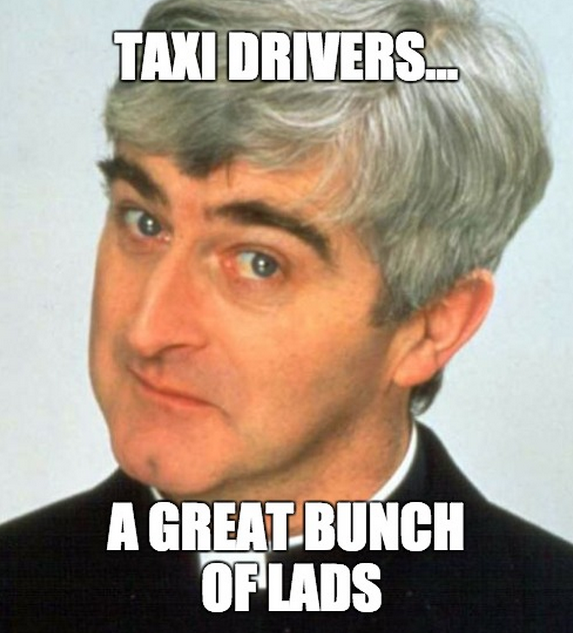 Milo being a splendid chap and always up for ” a crac” thought that he would try to overtake on some rather serious bends.  I closed my eyes and did a fair few Hail Marys whilst the others in the mini bus just encouraged him to go faster. I guess with a few whiskies inside of you the equivalent of Dutch courage will never be far away.  I digress.  Milo turned and beamed (whilst still driving at speed!) Still no sign of the coffin.  F.F.S. how fast can a hearse go on country roads, some of them not even made up.    “We’ve lost them” I exclaimed in horror ” Can we go straight to the church?”

“To be sure, I can ” said Milo  ( I promise you he really does speak like that) ” but I need to know which Church it is, sure now, I do!” and he nodded to himself/  By this time panic had set in and people were either asleep; terrified or just plain comatose.

We all turned and looked at one another.  In all of the faffing around, no one had actually found out which church it was.  We were doomed.  We pulled over to the side of the road and waited for the other mini buses to turn up.  Milo got out and had a cigarette and a Pee.  Most of us averted our eyes.  Aunty Terry didn’t!

Suddenly and from out of nowhere we saw a hearse again.

For some reason it had come from another direction.  Maybe old Milo had taken the short cut and we had headed them off at the Pass. Ever ready for yet another challenge thought, he shot back into the drivers seat, doing up his flies en route  and steamed off after them.  The plan now, other than there was ” no plan“, was to take up our position behind the Hearse and just slip into the Church as normal.  The six foot guy who no one knew but told us that he was carrying one corner of the box would hang around outside and see if someone else had taken his place due to the late arrival.  If not, he would take up positions accordingly and if they had he would slip in somewhere at the back.  All good!

“It would appear I’m not needed” said the six foot mystery mourner   There are already 4 with the coffin so I shall go and sit inside. And so in we all shuffled Heads down as we didn’t want to be seen to be late and disrespectful and if you recall, there were 3 mini buses of us so its not like we could slip in quietly and those in Mini Bus Number 3 appeared to have imbibed of the grape, or grain, or probably both rather too much already and were singing lamenting Irish Ballard’s to themselves and to anyone else who would listen.  Simply a case of ” another sherry Mother Griffin?”    As we walked into the Church there was incense; wailing (oh such a lot of wailing) black lace veils and a coffin at the end of the aisle.

One thing then struck me. Then another in the party and then another.  The whispering between us became more urgent.  Perched on top of the coffin was a picture.  I know its not a normal commonplace British thing to put up photographs of the departed but its something the Irish seem to have copied from the Yanks ( on this occasion, Thank the Lord) and the picture on the coffin was certainly not of Auntie Bridie.  Not by a long shot.  Not on a good day and in fact not at all.   It would appear we had turned up at the wrong funeral!!

Now how on earth could we get out of this funeral without anyone knowing?  We also had to ask, yet again, Milo to step on it and get us to the right funeral… this time?  But as we still didn’t have a clue where we were going and how we were going to explain our absence,  we found a little Bar and planned our next move…

I never seem to get it quite right but I still have fun trying. And I am not about to give up now. Having now reached the front of the taxi queue ( age wise) I think I have nothing to lose and despite having lots of marriages under my belt, I still think I have one more left in me. I live on the south coast of England but I migrate when I can and become a swallow in Cape Town.. Watch this space!

Its just another day by the beach

Marlboro in the morning

Arcady comes to visit us in New York...

Roger and the Atlas Mountains

Thin end of the Wedge

No images found!
Try some other hashtag or username

This website uses cookies to improve your experience. We'll assume you're ok with this, but you can opt-out if you wish. Accept Read More